The three weeks between last week’s chemotherapy and this presented moments of chaos, as well as calm. As for chaos, my son developed an upper-respiratory virus the day after my treatment. To avoid getting sick and a winning a return trip to the ER, I quarantined Hampton to mom’s house. He returned home Saturday, just in time for the two of us to enjoy opening weekend of March Madness.

The Pillsbury version of March Madness began at 10 am the next morning when Hampton walked into my room writhing in pain from a stomach ache. I suggested drinking water and lying down by me; he obliged until his vomiting started. I put on a mask and sat helplessly three feet away as he got sick each hour. No fever and no pain on his right side signaled to my TV-trained medical mind that it wasn’t appendicitis. (Foreshadowing: One of my greatest weaknesses as a mom is identifying my children’s illnesses).

I texted a best friend who serves as my go-to medical advisor, catching her walking into The Getty with her family on Spring Break. He didn’t have appendicitis, I told her, but she disagreed and suggested the ER. Believing the art and atmosphere were clouding her judgement, I called our pediatrician’s hotline. And no one returned my call. Twice. At this point, I used the most precious asset in my phone – our sainted pediatrician’s cell number – and texted her for advice. Dr. Angela Chia also felt the ER was necessary, so mom drove us to Children’s Memorial Hermann Memorial Hospital and Hampton limped into the emergency room.

Twenty minutes later, Hampton got an IV and when the drugs took effect, he turned into a regular Ronald Reagan, post-assasination attempt. Hampton told the nurse administering the IV, “I’ve got ice in my veins!” – a la NBA player D’Angelo Russell; he said to another nurse doing the ultrasound, “I”m pretty sure I’m not pregnant.” But the blood work and ultrasound revealed he did have acute appendicitis, and in a matter of 2 hours he was in surgery. Howie Gerber brought us dinner (we requested Whataburger) and Mari Trevino made sure we got the VIP treatment, as she’s on the board of the hospital’s Heroes in Health organization. We received a visit from the Chief of Surgery, who reported everything went beautifully.

The next day as I waited for Mom to take us home, I sat on a rock outside the hospital with my bald head in my hands with fingernails discolored from the chemo – in other words, very weak. I begged God for a ladybug – my sign of deliverance, or at least acknowledgment – and walked over to a garden of bright zinnias to give God some help. Mom drove up and I fell into the car discouraged and even embarrassed that I asked for a silly sign I didn’t get. The rest of the day was spent administering Hampton’s pain meds and my anti-nausea meds and us both having a pity party. That evening, I checked the mail and found a package from Susan Kemmerer — her original ladybug art.

A ladybug playscape in Austria

My gift from Venice!

That evening, I heard from my daughter, gallavanting across Germany and Italy with her school. She sent me pictures of her ladybug coffee mug from a German coffee shop and a ladybug playscape from an Austrian playground. O ye of little faith. My trip gift was a glass ladybug from Venice.

The remaining two weeks prior to this week’s chemo went relatively smoothly, despite a 101.8 fever. I avoided the ER because I had the Neulasta patch last treatment – something I got again yesterday. When I felt better, I sought calm with a water feature for my room and a fountain for my patio. All of a sudden, the soothing sound of water is something I crave as much as soft things, like the new jammies Gracia Wynne dropped by.

My “water feature” in my room 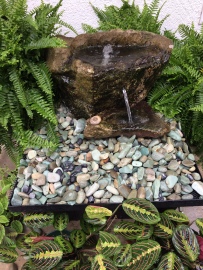 New fountain on the patio 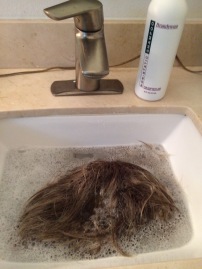 Reflecting on the past three weeks and the concept of water made me think of artist Helen Frankenthaler. This feminist vanguard pioneered her “soak-stained” technique in the 1950s in New York City. I learned about Frankenthaler by studying her piece “Mountains and the Sea,” then saw her work exhibited at the Denver Museum of Art’s “Women of Abstract Art” exhibition last summer when I snuck away from Hampton’s lacrosse tournament. Since then, I’ve been grateful to see her art during work trips to New Haven, San Francisco and Detroit and just two days ago at the Menil’s “The Beginning of Everything” exhibit.

Taken at the Denver Museum of Art’s “Women of Abstract Expressionism” exhibit, Summer 2016 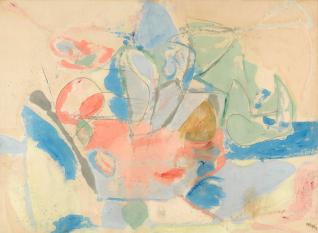 “Mountains and the Sea” 1952, from the Helen Frankenthaler Foundation

“Influenced by Hans Hofmann, Jackson Pollock and the art critic Clemen Greenberg, Helen Frankenthaler came to develop a highly original and iconic way of painting that would in-turn inspire generations to come. She invented a colour-stain technique, thinning oil paint to the consistency of watercolour, and applying it directly to an unprimed canvas on the floor. The paint would soak in and stain the canvas delicately, rather than accumulate in thick layers over the top, creating a breakthrough technique that had never been seen or done before. With a balance of drawing, painting and fresh washes of colour, this method was debuted in 1952 in her iconic and arguably most-famous work, Mountains and Sea.” – from oddpears.com

Cancer impacted Frankenthaler’s life, too, when her father – a New York State Supreme Court judge – died when she was only 11. The following four years of her life were characterized by depression and intense migraines. Art carried her out of this phase and pain of life and into Bennington College in Vermont, where she studied under Mexican painter Rufino Tamayo. An affair with Greenburg in 1950 provided introductions to de Kooning, Hoffman and Pollock (whose pouring technique she imitated using watered-down paint to stain, not oil to streak. Unlike first generation Abstract Expressionists who painted from within, however, Frankenthaler used nature and landscapes as her inspiration and painted with diluted pigment, instead of stacking thick impasto more characteristic of those who painted before her. Today, Frankenthaler is mentioned along with Mark Rothko as progenitors of the Color Field movement.

“Whatever the medium, there is the difficult, challenge, fascination and often productive clumsiness of learning a new method,” she said, “the wonderful puzzles and problems of translating new materials.”

I feel the same about cancer. The drugs and side effects constitute learning for me, not just about perseverance, but also how to receive life-giving words, meals and packages from friends near, far, old and new and translate it all into life-changing meaning. I have one more Red Devil treatment, followed by six weeks of rest before a double mastectomy. The eight-month process will be remembered as a time soaked and stained with puzzling beauty.

And get a kick out of this Renaissance work of art from Florence that Eliza said reminded her of me! This is a portrait of Maria Bonciani, circa 1489.