My first week with the Red Devil is drawing to a close, mercifully. I did not experience violent nausea (TMI, but I didn’t), just the precipice thereof. Taking anti-nausea meds around the clock and knowing my mother sat one groan away in my home all week assuaged my illness to the point that said she and I ventured to Hampton’s first track meet on Saturday morning.

Hampton competes intensely, almost at the same level at which he watches YouTube. When track tryouts loomed in January, he took (virtual) high jump lessons from 1968 American Olympian Dick Fosbury, who revolutionized the sport by jumping over the bar “backwards.” Fosbury’s innovative take on a sport static since 1896 earned him #28 on the list of 50 Most Stunning Olympic Moments and Hampton a fourth place finish. (FYI: USA v USSR 1972 basketball game tops the list).

Fosbury at the 1968 Summer Games in Mexico City 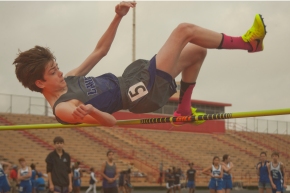 “I guess it did look kind of weird at first,” Fosbury said, “but it felt so natural that, like all good ideas, you just wonder why no one had thought of it before me…Intuitively I liked the contradiction: a flop that could be a success.”

I found a similar contradiction in German artist Anselm Kiefer‘s 1978 Ways of Worldly Wisdom: Arminius’ Battle. This large-scale work at first resembles a rejected draft of children’s scrabble exacted with a stick of charcoal on Manila paper. Upon closer inspection, one recognizes woodcut portraits which reduce facial features to linear etchings. All of this is covered in rings (simulating rings in wood) surrounding an engulfing, one dimensional flame. The portraits represent German poets, artists, philosophers and military leaders – a Germanic history taboo in the post-World War II era.

According to Kathleen Soriano, curator of the Royal Academy of Arts:

“The Pop Art portraits of Andy Warhol or Gerhard Richter’s 48 Portraits are contemporary with this work and show that Kiefer, whilst looking back, is always firmly rooted in the present and always looking to the future and reflecting on the big questions in life: how did we come to be here, what am I here to do?“

The most perplexing contradiction associated with seeing this painting hanging in the San Francisco Museum of Modern Art was its likeness to one hanging on my living room wall. 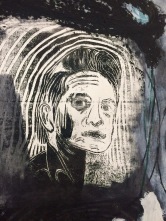 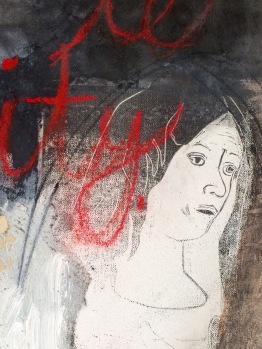 “Have you heard of an artist named Anselm Kiefer and do you know that he ripped you off?” I texted my friend and artist Jenn Fox from the German Art After 1960: The Fisher Collection on the museum’s sixth floor. When Jenn moved to New York to pursue her dream of filmmaking several years ago, she sold off works created when completing her MFA at Houston Baptist University. I was THRILLED when I clicked “BUY” fast enough to purchase “Voices Carrying Over Water.”

As it turns out, Anselm inspired Jenn’s art, but I like mine better than the SFMOMA’s anyway. My large-scale woodcut and silk screened painting incorporates portraits of men and women alternately lauded and loathed: Johnny Cash, Mary Magdalene, George Bush (#42 and #44), Sylvia Plath, Bill Clinton, Martin Luther King, Jr. and Barack Obama. The question scrawled in red oil stick and connecting the individuals reads: “What is left to me? fallibility”

Jenn explained the genesis of the question lies in a poem titled The Calvinist by theologian John Piper. In it, the narrator observes a man throughout phases of life: more self-righteous ones followed by moments of hubris and redemption. In the end, the pilgrim acknowledges his humanity, mortality and eternity.

In the end is the beginning; the last shall be first; a backwards flop succeeds; the Red Devil cures. Looking to the past week and anticipating three more treatments before I ring the bell on the fifth floor of the Nellie B. Connally Breast Center, I join Kiefer in reflecting on the big questions of life.

My people bringing happy hour to my bedroom.

My facial features also mirror the woodcut versions above, in that I’m all eyes and angles without any softening features like eyebrows or eyelashes. In truth, I look like a white onion. Thankfully I receive a reprieve for the next two weeks, allowing my body to build back up before returning to MD Anderson on March 7 for my second date with the Red Devil; our relationship ends after the fourth treatment, at which time I’ll prepare for a double mastectomy.

Until then, I paint on eyebrows, rejoin friends at work, gratefully accept meals and anticipate trying the $35 shampoo place mom pointed out on Saturday before gulping back her words and sending us both into hysterics. What is left to me? Vulnerability.

To learn more about Anselm Kiefer’s work, read this New York Times review of his 1988 traveling exhibition and learn how to make your own woodcut in the style of Kiefer by clicking here. Jenn Fox’s next work of art, her first feature film titled Shotgun Honey, debuts in April before heading to festivals. Watch here for details. And The Hamp competes again this Saturday: Stay Tuned!