Sunday at church, Mark and I grabbed our coffee and tea before walking into the contemporary service at St. John the Divine. An old friend stopped us, saying she didn’t recognize me with blonde hair. I never know how to reply to others’ acknowledgement of my new hairstyle, be it blonde or bald, so I sheepishly default to, “I know. I have cancer. Crazy!”

A few feet away, over our friend’s shoulder, I made eye contact with a dear man who, with his wife, prays over me each week after I take communion. Pointing to him and smiling, I added, “He’s praying for me.”

Mark and I continued toward church before being stopped again, this time by that same praying gentleman. I don’t think he recognized the blonde me, either; but when he did, he came after me, held my elbow and said, “We have a prayer shawl for you. I’ll take you to the woman who’s holding it.” Not knowing what a prayer shawl was or the person to whom I was being led, I obediently followed. And here’s what I received.

This was the second prayer shawl gifted to me since being diagnosed with stage 2 breast cancer, the first made by my mother’s friend, so I decided to learn more about this token of care. Based on an Old Testament verse in book of Numbers, a prayer shawl is a visible manifestation of God’s presence. A group at St. John the Divine meets every Wednesday from 9:30-11:30 am and knits prayer shawls for those who are bereaved, undergoing medical treatment or in any kind of distress. A note is included with each shawl, explaining the ministry and a commitment to uphold each recipient in prayer. 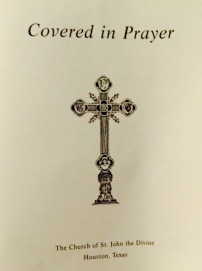 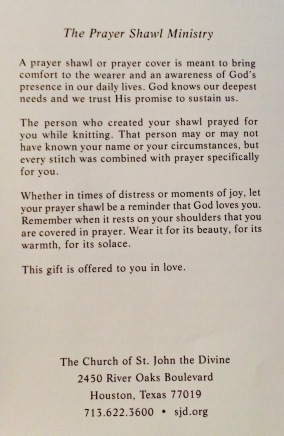 According to the ministry founder:

“The most stunning thing is to give someone in distress something that is totally unexpected. Something they can’t purchase, meant to remind them how close they are to God. They can (literally) lay that comfort over their shoulders and be reminded of God’s grace and love and that people are praying for them. It doesn’t take the pain away, but it helps to bear it.”

I can attest to the stunning part. To hear that someone whom I don’t know prayed for me as they knit this beautiful garment was completely humbling, as was realizing that I miscounted treatments (time flies when you’re having fun) and TODAY was the LAST Taxol treatment, not next week. With Pam Cooner as my Plus One, my first round of chemo is in the rear view mirror. I celebrated by getting a set of fake eyelashes to replace nonexistent ones, powder to paint on disappearing eyebrows and a fantastic egg salad sandwich at The Brown Bag Deli. Then I attended a meeting for track parents at Lanier Middle School which – now completely frustrating – was scheduled for 6pm, not after school. #dayofalternatefacts

Pam and me in my second prayer shawl 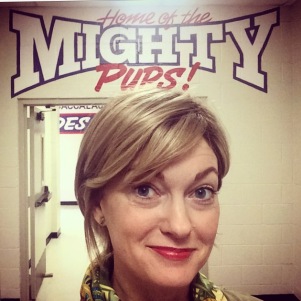 My prayer shawls call to mind Diego Rivera’s 1936 The Weaver. In keeping with Rivera’s focus on Mexico’s indigenous people and craft, this piece highlights a woman practicing the centuries-old tradition of weaving with a back-strap loom. The woman wearing blue and white, colors associated with the Virgin Mary, weaves a striated garment by manipulating six wooden tools, a number representing domesticity, justice and provision. The chest of drawers, also a lapis blue, holds ten drawers which, in numerology, resonates with creativity and independence. Lastly, the mechanism holding the orange thread incorporates twelve spindles, a number connected with the concept of completeness. The mathematical aspects of the painting, including columns on the textile and the weaver’s skirt, could reflect the desire of artists of that time to return to order, a tendency Rivera observed while living in Europe post-World War I when art reverted from abstraction to reflect realistic still lifes, portraits and landscapes denoting stability.

The roots of Rivera’s most well-known works lie in the Mexican Revolution. From 1910-1920, a bloody battle instigated by unrest over a president (sound familiar?) raged between the ruling power and the agrarian population. To communicate messaging supporting the civil war to an illiterate citizenry, Mexico’s secretary of public learning commissioned Rivera to create large-scale murals on public buildings. Rivera traveled to Italy on a government grant to learn the fresco technique (painting onto wet plaster), then leveraged that learning to adorn public spaces with patriotic, often socialist/communist-inspired murals. In doing so, he created a national identity through art that celebrated working peoples’ culture and lifestyle.

According to the museum guide for Mexique 1950-1955, which I was fortunate to see two days before closing:

After going back [from Europe] to Mexico in 1921, Diego Rivera created the iconographic language of a genuine utopia, the popular and monumental image of the Indian and mixed-race Mexican people, bound for a future filled with progress and greatness. All this prompted the emergence of a sense of national pride and belonging to a race, which helped forge the social stereotypes still present today.

Me with an excerpt from Río Juchitán on the exhibit banner

Above are a few photos I took of Rivera’s work from the Mexique exhibit. One of his most monumental accomplishments, however, is at the Detroit Institute of Art. Detroit Industry is an in situ (meaning created where it’s exhibited)  fresco cycle (aka room comprised of murals). He created these iconic frescoes while living in Detroit and with wife/artist Frida Kahlo. Check out this site for guided tours of what Rivera considered his masterpiece. 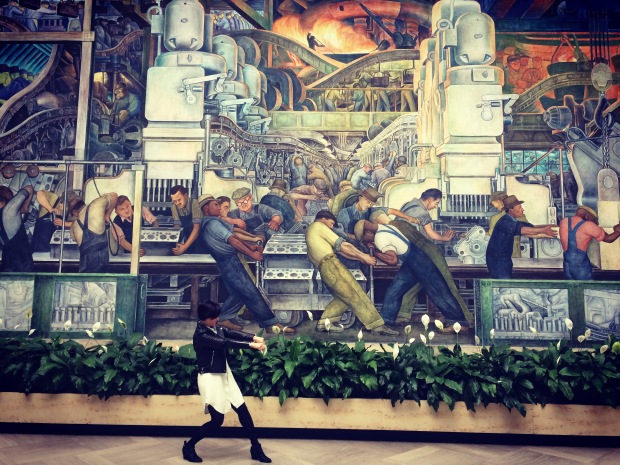 Pulling my weight in Rivera Court at the Detroit Institute of Art.

Rivera depicts workers evoking a quiet determination to complete wearisome tasks with muscles tensed, heads down. I can relate. On Valentine’s morning at 6:45 am, I’ll have a scan to see if Taxol shrunk the tumor. A few hours later I’ll begin the rough portion of treatment – an IV infusion of two drugs, including one known as “Red Devil.” I’ll apparently feel awful for four days, followed by two weeks of building back up before starting over again. This cycle will repeat three times over twelve weeks leading up to a double mastectomy.

In light of the task at hand, I am grateful that this protocol is precautionary. The cancer is contained and MD Anderson and I committed to completing these steps to ensure I won’t be a repeat customer. So, as Luke 9:62 exhorts and Diego Rivera paints in his works below, I’m putting my hand to the plow and not looking back.

To see how one weaves on a back-strap loom, watch this YouTube video. Contact St. John the Divine’s Prayer Shawl Ministry through its Facebook page, then plan on a road trip to see Mexico: 1900-1950, coming to the Dallas Museum of Art, March 12 – July 16. Finally, if your child needs occupational therapy, Pam Cooner (713.962.8687) is the best in the business.

9 thoughts on “Weaving My Story”