My Tuesdays at MD Anderson involve three, sometimes four, appointments: getting my blood drawn to see if I’m healthy enough for chemo; accessing my port (sticking in the needle used for IV chemo); checking in with my oncologist and receiving chemo. Schedulers try to stack these appointments as close together as possible, but it’s never less than a five hour process.

After the early morning blood draw, I hit the library before settling into a recliner directly above MD Anderson’s main entrance. Watching scores of people file in for work, treatment and support of family members holds my attention. Most memorable was a woman wearing a surgical mask and a pink “I’m Strong” T-shirt cradling the arm of her fragile mother there for moral support. People (including Michael Buble’s family) come to MD Anderson from across the country  and around the world, evidenced by signs in Arabic. I’m so fortunate that my journey takes twenty minutes door-to-door. 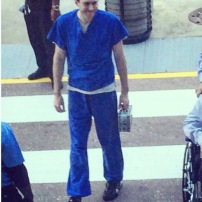 Once inside, people navigate a maze of 12 buildings using various forms of transportation, including shuttles criss-crossing a looonnnngg walkway connecting the Main Building with an on-site hotel and the Mays Clinic. MD Anderson employs approximately 21,000 staff, 1,700 faculty members and 3,100 volunteers. Last year, 135,000 patients received care here and 9,400 participated in clinical trials. In short, this place is a small city.

Contributing to my pillaging of the library

Ca. 1989: our stash of candy we threw from our Rose Festival float

Ca. 2016: the stash of cherry sours Julie brought me from Dallas bc I asked for them

Today, oldest friend #1 did some traveling of her own to #comewithCarrietochemo. Julie Johnson Nicholson is older than I am (by two months, but still) and her mother calls us “play pen friends.” When she sniffed out that something was up with my health, she harassed my sister and me until we agreed to let her come. Sarah picked Julie up at the airport and she made it for appointments 2-4 before my mom drove her back to Hobby. Julie claimed the down-and-back made her feel like a jet setter, as did her ride on the MD Anderson shuttle.

Julie is my “Canager” – the self-appointed manager of my cancer. She is also no stranger to struggle. In February 2006, she lost triplets at 23 weeks – Will, Lucy and Annie. She and her husband, Mark, endured burying three babies and all the grief that goes with that to then establish a grief recovery ministry called Shift for kids at Watermark Church. Her purpose in life, in addition to being super mom to Luke and Zach, is walking alongside grieving families as proof that there is more to come. (I’m not just saying all of this because she brought me cherry sours, a coloring book/pencils, a museum book and willingly offered her Chase Sapphire credit card to pay for lidocaine to put on my port because I left my wallet at home – where I forgot to apply the lidocaine. 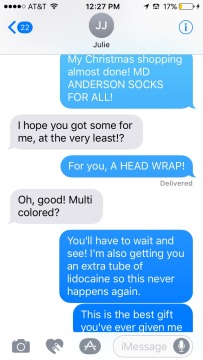 I drove straight from MD Anderson to dinner with mom and old friend #2, Larissa Burns Linton. Larissa is no stranger to struggle either, and her experience with cancer is a beautiful disaster. Long before both she and her husband beat different forms of the disease, Larissa lost her mother (my mom’s best friend) to breast cancer. Decades later, she lost her four-year-old daughter to acute myeloid leukemia. Mary Jo and Taylor Anne are buried side by side in Utopia, TX, an ironic name for a place that holds so much pain for Larissa’s family.

Out of the worst personal disaster I can imagine, Larissa created Hereos for Children, a non-profit organization that provides social and financial support for families of children with cancer in Texas. Grants cover things like mortgage payments, utility bills, groceries and too many funerals. If there is ever an organization deserving your support, this is the one, started by my original BFF. 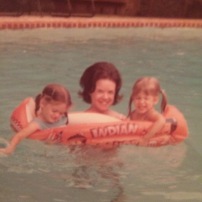 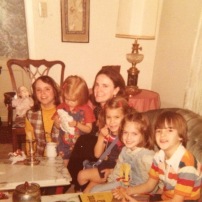 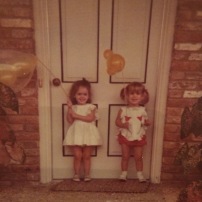 Today, with a picture of Mary Jo 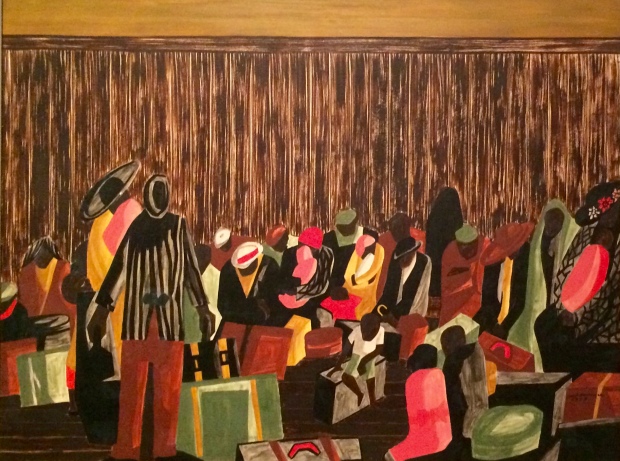 The comings and goings at MD Anderson, as well as my life-long friends’ movement from catastrophe to contribution, makes Jacob Lawrence’s Migration Series a fitting focus for this post. Lawrence was the first African-American artist exhibited at the Metropolitan Museum of Art and is best known for his Migration Series depicting African Americans’ exodus from the South between the First and Second World Wars. San Francisco’s de Young Museum, where I took the image above, provided the following description:

“Fleeing an oppressive sharecropper system, racial violence, and “Jim Crow” segregation in the South, African Americans left in search of higher-paying jobs in the urban centers of the Midwest, Northeast, and West in what later became known as The Great Migration.”

The Great Migration of more than two million African Americans included Lawrence’s family, which moved from South Carolina to New York for work and affordable housing. Lawrence grew up in Harlem and was greatly influenced by the Harlem Renaissance of the 1920s-30s. His first exposure to art was through an after school program and visits to the Metropolitan Museum of Art, where he gravitated toward Italian Renaissance masters’ use of tempera paint. Lawrence eventually used tempera (egg mixed with water and pigment) to create the Migration Series, 60 numbered panels accompanied by captions he composed. Completed in 1941 when Lawrence was only twenty three years old, the Migration Series was the first work exhibited by an African-American artist in New York City. Soon after, the Museum of Modern Art (MoMA) bought the even-numbered panels and The Phillips Collection bought the odd ones. According to the MoMA website, “Lawrence’s work is now an icon in both collections, a landmark in the history of modern art, and a key example of the way that history painting was radically reimagined in the modern era.” 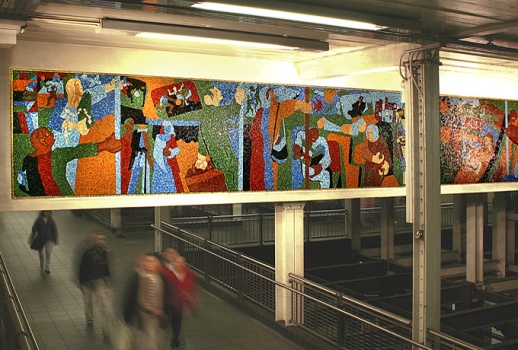 Comic books, hieroglyphics and Diego Rivera murals – works that told a story – inspired Lawrence. The “narratives” he chose to tell represent the first effort to document the African-American experience through art. In addition to the Migration Series, Lawrence painted series on Frederick Douglass, Harriet Tubman and Haitian freedom fighter Toussaint L’Ouverture. Lawrence’s last public work was also about movement: the glass mosaic titled New York in Transit is permanently on view at the 42nd Street-Times Square stop on the New York Subway.

“Lawrence is one of the great American storytellers—or, as might be better said, one of the great tellers of the American story,” said The New York Times art critic John Russell. Enjoy this brief video produced by The Philips Collection about the man widely recognized as America’s greatest black artist and donate to Heroes for Children by clicking here.

P.S. – Old friend #3 and internationally-renowned pianist Paige Roberts Molloy made me aware of work by her dear friend Derek Bermel titled Migration Series (2006) – Concerto for Jazz Band. His website says that the piece was commissioned by Wynton Marsalis for the Jazz Lincoln Center Orchestra and the American Composers Orchestra as part of Bermel’s Music Alive residency. Click on the program notes for more information on the Migration Series and how it inspired Bermel. THANK YOU, PAIGE!

“The work opens with a moody episode built atop a repetitive descending bass riff, with plaintive harmonies and sinewy solo lines. When he scores bluesy brass chords, Mr. Bermel spikes them effectively with gnarly modernist dissonance. There were riveting passages that combined choralelike harmonies with unhinged rhythms; a bleakly comic episode in which the brass players from the Jazz at Lincoln Center Orchestra evoked a wondrous gaggle of squawking, whining and pleading human voices.” – The New York Times

5 thoughts on “Migration at MD Anderson”