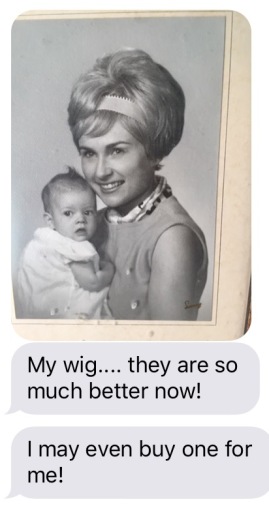 For several weeks my mother gently encouraged me to consider a wig. “We all wore them when you were little. Remember the picture of you and me when you were tiny?” The picture arrived on my phone. I demurred, saying I was opting for the Jackie O look to make use of my scarf collection. She revisited the subject several days later, texting, “My hairdresser told me about the best place and said that synthetic wigs are the way to go because the human hair kind get flat or frizzy with Houston weather and who wants that?” Umm hmm. Finally, Mom texted, “I would like to buy a wig for you. Would you like to go look?” She caught me in a weak moment after day 2 of chemo, the day after port surgery, and picked me up at 10:30 that morning.

When diagnosed with breast cancer, the second question one asks after, “What stage is it?” (mine is stage 2, hasn’t spread) is, “Am I going to lose my hair?” Therefore, walking into Andre of Houston Wig Salon was a step of acceptance for me. Roughly 75 wigs on styrofoam heads greeted us, all styles and colors. Isabel emerged from behind the counter with a sympathetic, knowing smile before I could turn around and walk next door for frozen yogurt. For the next hour, Isabel, Mom and I experimented with “cranial hair prostheses.” Each option began with my vehement Absolutely Not; gradually, a few made it into a resigned Maybe pile. The deciding factors were length and color. I’ve been growing my hair out, so a little longer seemed like an easy way to cheat the system. Color was a point of contention, and this is where it got good.

“I just think,” Mom began, “that you might want to go a little lighter than you are now. I think it would look less…severe.” “What do you mean?” “Well, you’ve just gotten so much darker lately and I know you’re going for an edgier look [???], but I think with chemo, especially, you might like a softer tone better.” Isabel agreed. “I mean, look at her eyebrows,” Mom said to Isabel. “That’s the color God gave her.” This is because I haven’t been to Raza lately to get my eyebrows dyed darker to match my edgy hair, but yes, this is true.

I walked out of Andre of Houston Wig Salon with not one, but two wig options (both lighter), several accessories and a Coke Zero.

With Mom at Andre of Houston Wig Salon of Houston

Option 1: A “Halo” that i top with scarves 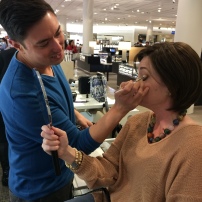 Mom also agreed that the color change necessitated a brighter lip, so I texted Paul DePadua. At the risk of sounding like a Kardashian, Paul (“Mr. Paul” to Eliza, who’s known him since she was six months old) is my close friend/makeup go-to. He’s also been the national trainer for Trish McEvoy for years. He and Trish are besties and she gives him a place setting of Hermés china each year for Christmas. I didn’t know Hermés even made china. I digress.

Last month Paul asked if I wanted to do a class with Trish when she came to Houston; I replied that something big had come up and I couldn’t. He asked if I was okay; I replied that I thought I would be. I forgot to circle back and tell him about the diagnosis, but he remembered. When I texted asking if he was available, he said, “Meet you at 2:40.” Eliza and I showed up with wigs in tow to find Paul in relaxed grey joggers and a teal, V-neck cashmere sweater. I thought to myself, “This is the casual Paul!” Thirty minutes later, I realize that’s because this is his day off, his husband’s birthday and he drove 30 minutes into pre-Black Friday Galleria traffic to meet me. He remembered my text from a month ago and figured this was important. Thank you, Mr. Paul.

So, now I’m ready for Day 15 of Taxol when the hair really starts falling out. Sometime next week, I’ll head over to Angelique Hoover and she’ll shave my head in one fell swoop. Mother said she just wanted me to have options and to have them on hand – to be ready. Mother knows best, and I’m grateful.

This beautiful portrait of mother and daughter hangs in the Museum of Fine Arts Boston. John Singer Sargent’s 1903 oil on canvas is titled Mrs. Fiske Warren (Gretchen Osgood) and Her Daughter Rachel. One can pretty easily identify a Sargent portrait by his use of whites, making fabrics seem translucent, like gossamer. If you look closely in the upper left hand corner, you’ll see a Madonna and Child sculpture from which Sargent posed the duo. According to the museum’s web site:

Gretchen Osgood (1871–1961) spent much of her childhood abroad while her father studied surgery in Germany and later worked with Pasteur in France (on their return, Dr. Osgood introduced Pasteur’s rabies antibodies to the United States). Gretchen and her sister were educated in languages, science, art, music, and literature, and scholarly pursuits sustained her for the rest of her life. Gretchen married a businessman, who moved the family to India, then Oxford. Upon their return to Boston, Gretchen was offered, but declined, teaching positions at Wellesley and Radcliffe.

Daughter Rachel donated their portrait to the Museum of Fine Arts Boston in 1964. Enjoy the full write up about the piece and the people here.

“Years ago I decided that the greatest need in our Country was Art… We were a very young country and had very few opportunities of seeing beautiful things, works of art… So, I determined to make it my life’s work if I could.” – Isabella Stewart Gardner

In addition to the subject matter, I love this painting because I am fascinated with the home in which it was painted, more specifically, the home owner. Isabella Stewart Gardner lived in Boston’s Back Bay (aka fan-cy) and chose to really shake things up. Gardner was quite the bohemian bon vivant and her escapades among the social elite garnered her a sketchy reputation, but not with besties John Singer Sargent and author Henry James.

Sargent painted Mrs. Fiske Warren and Rachel in the Gothic Room of Gardner’s estate – which she turned into an eponymous museum in 1900 for “the purpose of art education, especially by the public exhibition of works of art.” The museum seal Gardener designed is a stylized phoenix, the emblem of mortality, and the motto: “C’est mon plasir” (It is my pleasure).

This portrait Sargent painted of Gardner, said to make her look like a Byzantine Madonna, hangs in the same Gothic Room today, but not for the decade after it was painted. Gardner’s indecorous pose (the low neckline!) caused such a stir that her husband, Jack, requested she not publicly display the piece until after his death.

Walking through Gardner’s three-story, open air home almost felt like trespassing. The art patron imported from Italy all of the architectural elements (windows, doors, columns, etc.) then had it reassembled around the most lusciously-landscaped palazzo courtyard. I don’t know how museum conservators sleep at night because the windows are thrown open to the interior garden, exposing to fresh air the Titians, Boticellis and vast collection of sacred art just as Gardner would have enjoyed them a century ago.

The museum guards did sleep one night in 1990 when “the biggest art theft in world history” occurred. Thieves got away with 13 masterpieces by Rembrandt, Vermeer, Manet and Degas worth more than $500 million – leaving the frames behind. This CBS News piece shows a few of the stolen paintings, which the FBI thought were in the house of a reputed mobster living in Connecticut earlier this year. You can claim a $5 million reward for information leading to the art’s recovery.

If you’re into this kind of thing, I recommend her biography The Art of Scandal by Douglas Shand-Tucci. This is a cool article on the art she might collect were she alive today. If you’re REALLY bored, I wrote about Gardner in my research paper this semester as the patron who brought the first Fra Angelico to America.

One of Gardener’s greatest heartaches was the loss of her young son to pneumonia and the inability to become a mother again. She channeled the grief into creating a collection from ancient Rome, Medieval Europe, Renaissance Italy, Asia, the Islamic world and 19th-century France and America. Her legacy is art.

Taken at the Isabella Stewart Gardner Museum in August

This is a gorgeous slideshow of 700 John Singer Sargent paintings set to relaxing, instrumental music. Notice the whites and enjoy! And this is my shoutout to my mom, Sean Hayes’ lip synch to Lunchbox Lewis’ “Mama.”