Vocabulary.com lists four definitions for the noun “port,” none of which refer to 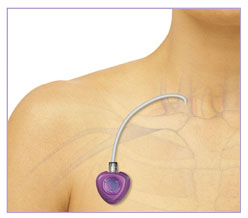 the device that was implanted below my left clavicle today. Place where items enter/leave a country, an opening in a wall for firing through, the left side of a ship and a sweet wine originally from Portugal do not describe my new accessory. The “oh, and it can mean a verb” option does: “to carry.”

After day surgery today at MD Anderson, this little thing affixed just under my skin will be the mechanism through which I receive chemotherapy for the next six months. The manufacturer’s web site boasts that it offers easy, flexible placement and access for needles. For me, this means that Tessie the Too Cheery Nurse will never again blame me for being dehydrated, too sensitive or too cold when mining for a vein in the middle of my forearm. Now, a nurse will stick a needle into lidocaine-numbed skin covering the port to carry the chemo into my jugular vein and out to my body. #carrychemotocarrie

Rhonda Routh‘s brave daughter, Meg, is a ten-year-old bone-cancer-surviving #badass. Rhonda suggested to Meg during her treatment that they name her port. I liked the idea. Since this device taps into my jugular, I naturally thought of vampires, so of course looked up “Find My Vampire Name” on Google.

I’m very pleased to introduce you to my new friend, Rose. Being from the Rose Capital of the America and a rosé wine fan, this name seems perfect. I have no idea what “Leto of the Vile” means, but when I Googled that, the image below came up. So when Rose gets accessed, I’m escaping to Leto of the Vile in my mind – wearing my gold chemo shoes. 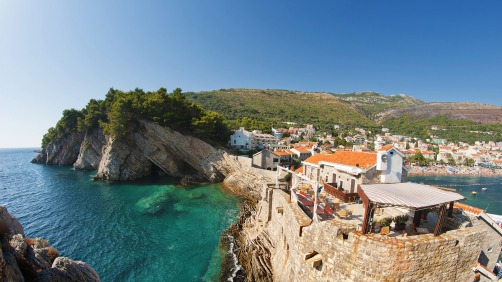 To be frank, today was rough. Washing my hair this morning, I realized it was coming out. Then a friend reminded me that eyelashes are hair, too, and will also go. I planned on going completely under for today’s procedure, but that was never the official plan and any hopes I had of making it so were foiled when I mindlessly ate a peppermint from the MDAnderson beauty shop while checking out their wig/tuban/shaving services. Even a peppermint constitutes “food or water after midnight,” making general anesthetic a no-go. I would much rather have cheated this morning with hot tea rather than a peppermint so the icepick in my right temple would’ve been assuaged with caffeine. The port area is tender and I feel like Frankenstein with this thing implanted in me.

But, I am grateful for a thoughtful and kind anesthesiologist with whom I had a mutual friend (the lovely Stefani Lucas Eckman – All Roads Lead to Tyler). And I looked cute in new Target leisure wear Mom dropped off yesterday (shirt and jacket have those cool thumb holes). I slept off a lot of the grogginess this afternoon in new pjs, also from my mom. I’m not in pain and I get to watch the Texans on Monday Night Football. This whole thing remains surreal, the same way I feel about Eliza visiting two colleges today and tomorrow. I just keep saying to myself over and over, “I can’t believe this is happening. How is this happening?”

“I have made use of the machine as others have used the nude body or still life,” said artist Fernand Léger. Because I will also make use of my new machine/device/Rose, I chose to look at Léger’s work with this post. 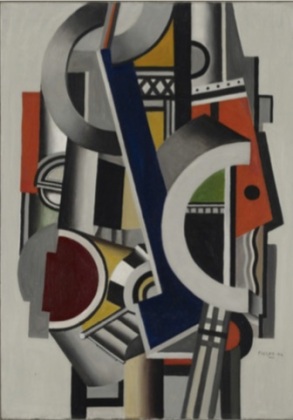 Léger was born in 1881 on a farm in the Normandy region of France, attended classes at Paris’ École des Beaux-Arts and trained as an architect. His love of lines and shapes, as well as unbroken, saturated colors, make his work uniquely recognizable amidst contemporaries Picasso, Braque, Mondrian and other early twentieth century painters. Partly cubism, partly primitive, strong back lines, contrasting shapes and singular color forms – these attributes earned Léger the labels “Father of Pop Art” and “the most modern of contemporary painters.”

The artist’s early work is all geometry – cones, spheres, tubes and gears. His preoccupation with mechanical forms stems from canons and weaponry that surrounded him as a World War I soldier. The luridness of war was also responsible for the limited representation of the human body in his oeuvre (pronounced uh-vruh) until much later in his career. “Just to endure the sight of the corpses, we had to joke about them. Our German prisoners were appalled by such irreverence,” he said.

Fleeing Paris for four years at the outset of World War II, Léger experienced one of his most prolific painting periods in the United States, while also lecturing and teaching. After a coast-to-coast bus trip, the expat didn’t mince words about Americans’ distaste for old things or his distaste for Texas.

“Across Texas in an appalling heat – an odor of petroleum that stayed with me for months – scanty vegetation – a landscape almost African in appearance – all very strange to me. And it was there I began to notice those branches of dead trees left lying where they fell, unheeded. Later near Lake Champlain where I spent the summers of 1943, ’44, and ’45, I was even more struck by the broken down farm-machines I would come across abandoned in the fields. For me it became a typical feature of the American landscape, this carelessness and waste and blind and ruthless disregard of anything worn or aged.” Ouch. 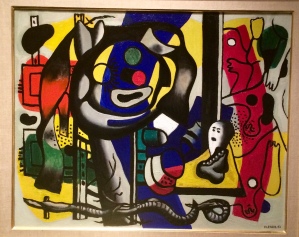 Most of Léger’s paintings are too chaotic for me, a constant cacophony of shapes and vibrant colors, as in his depiction of New York City titled Masque Negro at the Yale University Gallery of Art. However, the Detroit Institute of Art’s Girl and Plant, which he painted one year before his death in 1955, sends a more calming vibe. The color fields are separate and harmonious, not fighting for prominence. The general verticality of the piece (shapes, lines, elongated face, foliage) impart an uplifting feel, especially compared to the overlapping and almost violent jolt one experiences looking at Masque Negro and his later Diving series. 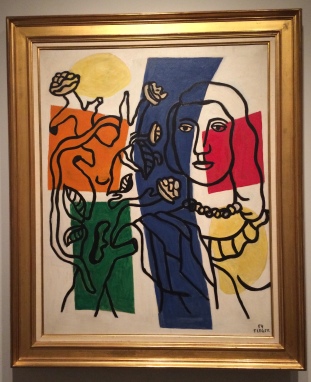 The large female looking placidly at a fixed point outside the picture plane is outlined in what seems like a singular, smooth brush stroke. She exudes peace and reminded me of a classical Greek statue of Juno, queen of the Gods and guardian spirit of females. (I was fortunate to see this one in Boston.)

Another possibility: In looking at Leger’s painting for this post, I kept thinking, “She looks familiar.” Then it hit me. The confident woman draped in robes and dominating the entire left side of the canvas looks a lot like Lady Liberty, given by Léger’s homeland to the land that sheltered him during the war. In the most bizarre twist, I researched French sculptor Auguste Bartholdi’s muse for the Statue. One account suggests it’s Isabella Singer, the multimillionaire widow of the inventor of the Singer Sewing Machine and patriarch of the family I researched in my previous post. 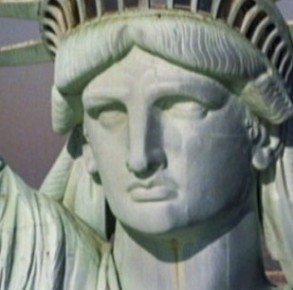 Lastly, I can’t escape similarities between Girl with Plant and the painting featured in my first blog post – David Park’s Louise. Look at the long, undulating serpent slithering up and around a fruitful Tree of Knowledge of Good and Evil and heading toward Eve’s listening ear. Perhaps this is an archetype of the first female.

(I’m still looking for an “official” account of who Girl is. My conjectures are just that, but that’s the joy of art – play by your rules and let it speak to what’s going on in you.)

Looking beyond the subject of the painting, its fluid black lines which define the content are, for the most part, overshadowed by hopeful rainbow hues. That’s a visual image I can take with me to MD Anderson tomorrow for my first chemo treatment with Rose.

I drew on the following articles for this post: Leger at Rouses Point, 1944: A Memoir by Martin S. James and Norbert Messler; and Eleven Europeans in America in The Bulletin of the Museum of Modern Art, Vol. 13, No. 4/5, pp. 13-15.

5 thoughts on “Mechanical Elements in Me”